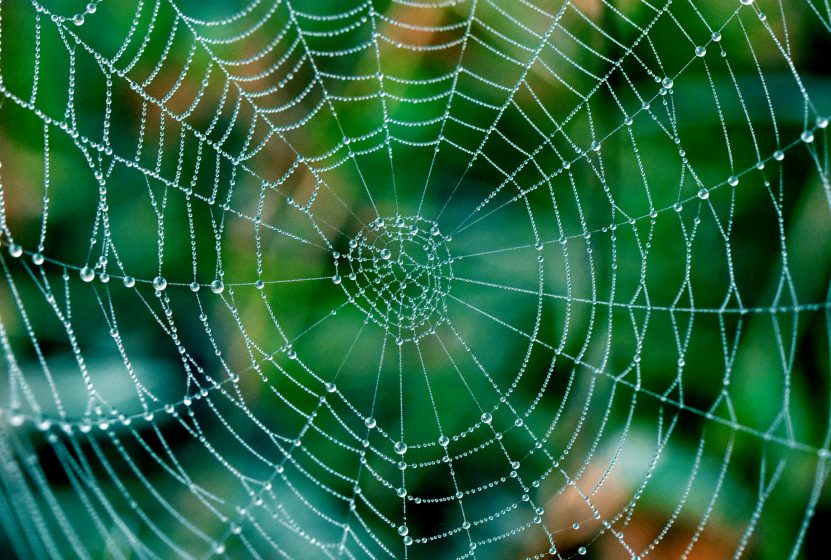 While most of North America’s 4,000 species of spiders are venomous, only four are considered dangerous. That’s mainly because most spiders’ fangs are too short and fragile to break through human skin.

The four deadliest spiders didn’t become deadly because they had longer or stronger fangs. Or because they use pheromones to coordinate a massive attack, like Africanized honeybees, against their target. This toxic quartet earned their well-deserved reputation from the potency of their venom that turns living tissue into dead, tenderized meat.

The most venomous of North American spiders, recluse spiders (there are 11 species), are found throughout the United States, with the brown recluse primarily contained in warmer latitudes.

With a body between ¼ to ¾ inch long, the brown recluse’s most identifiable mark is a dark violin shape positioned on top of the leg attachment region with the violin “neck” pointing toward the abdomen. The recluse also only has six eyes compared to the eight eyes in other spider species. A pair of eyes is in front, and one pair sits on either side of its head.

If you’re looking for a brown recluse, you might find them living in the gaps under logs, rocks, and behind just about any item stored in your garage.

Nearly 90 percent of brown recluse bites result in no reaction in human skin. Some may develop a small red papule (hard, raised skin lesion) that will heal on its own.

The brown recluse’s claim to fame comes from the other 10 percent of bites. The venom from these bites creates dermonecrotic lesions that develop over the course of two weeks. The skin surrounding the bite turns black and eventually falls off.

The brown recluse’s venom contains a rare protein that has not been found in any other venomous animal. This protein attacks parts of the victim’s cell membrane. If the victim has a reaction to that protein, a dark lesion will form around the bite mark. This is the body’s immune system attempting to keep the venom from spreading by shutting off the blood supply to the affected area. This response had been described as “tissue suicide” to prevent additional damage.

If the brown recluse venom extends beyond the initial bite area, it is considered systemic. The proteins will start destroying blood cells, possibly leading to kidney or renal failure.

Fortunately, most brown recluse spider bites go unnoticed, and their prey is small. During the day, the spider rests in its web and hunts at night for soft-bodied insects like crickets and cockroaches.

The black widow is one of 32 recognized widows in the genus Latrodectus. The black widow is found throughout North America, from Mexico to Canada, but is most common in the southern and western areas of the United States.

A black widow’s body length is approximately a half inch and is black. The female widow has a shiny black body and an orange-to-red hourglass marking on the underside of her abdomen. Sometimes, this hourglass is a small red dot.

Black widows create their webs close to the ground in sheltered areas such as woodpiles, rubble piles, and undisturbed, cluttered spots in crawl spaces and basements. Black widows also love to hang out in outdoor bathrooms and under toilet seats where flies are plentiful.

Unlike the brown recluse’s venom, the venom of a black widow attacks the victim’s nervous system. It contains neurotoxins called latrotoxins that are 15 times more toxic than prairie rattlesnake venom. The most potent of these latrotoxins is alpha-latrotoxin. This specific toxin targets the juncture between the synapse of one neuron and another neuron or muscle cell. This attack causes the neuron to dump all of its neurotransmitters, creating intense pain and often causing nausea, headaches, abdominal pain, and hypertension.

About 2,200 people report being bitten by a black widow every year. Most recover within 24 hours with medical treatment that may include antivenin.

The black widow uses its webs to trap flies, mosquitoes, beetles, and caterpillars and then injects its venom to paralyze its prey before wrapping it in silk.

Black widow venom has evolved over the years to become more potent. Scientists have recently observed black widows tackling larger prey like small snakes and lizards. The spiders are even building more robust webs to hold their heavier quarry.

The hobo spider is found in the arid regions of southwestern Canada and the western United States.

The smallest of the deadly four, the hobo spider is light brown with a body length between ⅓ to ⅔ of an inch. The spider’s abdomen sports several herringbone-shaped markings. Males have two large mouth pieces — called palpi — that resemble boxing gloves. Females typically have larger and rounder abdomens.

Hobo spiders prefer to inhabit human structures. Since the spider rarely climbs vertical surfaces, it is commonly found in basements and ground-level structures.

The hobo spider is considered the most aggressive of the four spiders and often bites with little provocation. It can run at a top speed of 1.1 meters per second, or about 2.5 mph.

Like the brown recluse, the hobo spider has necrotic venom. The hobo spider’s bite may initially be painless, but the bitten skin will soon appear red and develop into a blister after 24 hours. The blister will burst, leaving an oozing ulceration in the skin. The wound may take several months to heal.

The hobo spider is a funnel web spider, building a funnel-shaped structure made from silk sheeting. The spider waits on the small end of the funnel for insects to tumble into the structure.

Found throughout the U.S., the yellow sac spider comes in two primary varieties. C. inclusum is native to the States and typically found outside, while C. mildei was introduced from Europe in the 1940s and is mostly outside.

The yellow sac spider’s body is between ¼ to ⅜ of an inch long. While the body color depends on recently eaten prey, it is usually pale yellow to tan and may even have pink or green hues.

The indoor-loving yellow sac is found in homes across America. In contrast, the outdoor-favoring yellow sac lives in silk retreats in crevices or under leaves.

Since the yellow sac hunts at night, most nuisance bites occur when this tiny hunter bumps into a sleeping human and plunges its powerful fangs, easily penetrating the skin.

The yellow sac’s venom is mildly toxic. Although the bite may be painful and cause skin irritations, it rarely causes necrosis in the skin. Most yellow sac bites heal quickly with minimal scarring. Due to the similar but milder symptoms, yellow sac bites are often misdiagnosed as brown recluse bites.

Oddly enough, some yellow sac spiders are attracted to gasoline. Some species have woven webs inside empty gas containers and even inside the canister vent of specific Mazdas, resulting in blockage and pressure build-up in the car’s fuel tank.

While they may not look exactly alike, spiders and scorpions are both members of the arachnid family.

Both have four pairs of legs, two distinct body segments, and use sensory organs to detect their nearby prey. Spiders use their fangs to inject venom, and scorpions use their front pincers to catch their quarry and inject venom with a stinger attached to their tail.

Most scorpions in the United States have a weak venom that is only potent enough to kill the small animals and insects it feeds on.

But the Arizona bark scorpion has enough venom to kill a human.

The Arizona bark scorpion can be found in the southwestern U.S. in the Sonoran Desert. Adult males can reach 3 inches in length, and the slightly smaller females 2-¾ inches in length.

This scorpion has layers of wax on its exoskeleton to prevent body fluids from evaporating in the hot desert sun. Even with this protective adaptation, the bark scorpion hides under rocks and tree bark during the day.

A nocturnal hunter, the Arizona bark scorpion preys on beetles, crickets, cockroaches, and other scorpions.

The Arizona bark scorpion’s venom is a cocktail of toxins that target the victim’s neurons, causing intense pain that can last between 24 to 72 hours. People have described the sensation of searing electric jolts in the affected limb. Stings on hands and arms have even temporarily disabled the limb.

Like most other scorpions, Arizona bark scorpions will glow when exposed to a black light. Typical UV LED lights may be a handy addition to any savvy desert camper’s kit before setting up for the night.