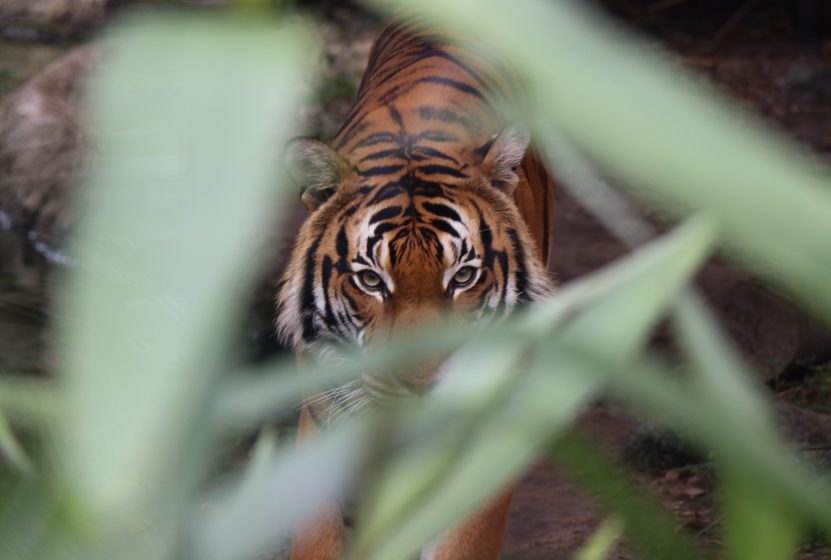 Tigers (Panthera tigris) are the largest of all cats and are more deserving of the title of “King of the Jungle” than the Lion (sorry Leo). Tigers can be found in the snows of Siberia, jungles of South East Asia, and high in the mountains of Nepal.

Male Siberian Tigers can tip the scales at nearly 700 pounds and 10 feet long including their tail. Tigers once lived all over Asia, South of the Malay Peninsula to the islands of Bali and as far North West as the Caspian Sea. Your house cat and Tigers share about 95% of their DNA with the bigger cat’s next nearest living relative being the Snow Leopard.

Unfortunately, several species of Tigers have been hunted to extinction including the Caspian, Sumatran, and Balinese Tigers.

Due to conservation efforts, Bengal Tigers have the largest population living in the wild today. They and the remaining Tigers of the world are now reduced to living in only about 6% of their original habitat.

Tigers are the only big cats that have stripes. Each Tiger has a unique stripe pattern like fingerprints. You would think that their orange fur and usual pattern would make it hard to blend in, but the eyesight of most of the Tiger’s prey doesn’t see into the red spectrum and the vertical stripes break up their outline and blend well in tall grass and the shadows cast by trees onto the forest floor.

Another unique characteristic of Tigers is they actually like water and can swim long distances. When it is hot in the summer Tigers will bathe in water to cool off and will swim across large bodies of water to patrol and hunt. The longest swims ever recorded have been 9 miles in a single go and 18 miles in a day.

Adult Tigers usually hunt alone and use stealth and ambush to get their next meal. For small prey, one swipe of their massive paw will usually do the trick. If they take down a large animal like a sambar deer they only need to eat once a week. Tigers will take their kill and hide it so they can return to it eat some more- sometimes 18 pounds in one sitting! Tigers will also eat fish and for some reason enjoy the prickly delicacy of porcupines. Unlike Lions who have a strict group hierarchy Tigers will share their kill with other Tigers and even cubs they aren’t related to.

Tigers usually live alone and will patrol a home range of up to 50- 60 square miles. Siberian Tigers have the largest ranges due to fewer food resources, but all Tigers feel the encroachment of man and have much smaller ranges that often overlap. The big cats leave large scratch marks on trees and leave scent and scat along trails as a message to others and helps to avoid conflict.

Female Tigers have litters of three cubs on average who will stay with their mothers for up to two years learning to hunt and survive. After they are self-sufficient the mature Tigers will head out on their own to establish their own territory and hopefully find a mate.