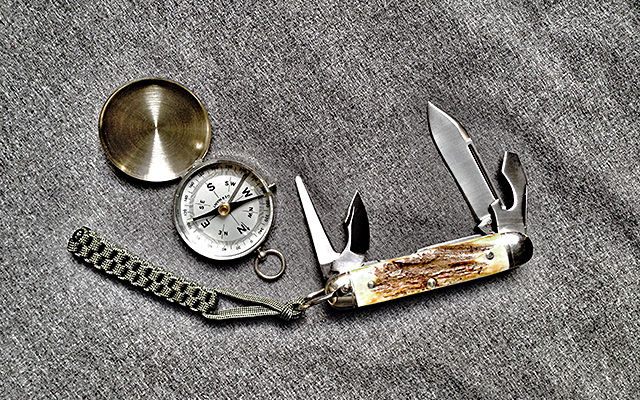 At first pass, “Scout Knife” would suggest that this is a type of knife used by “Scouts”, or “Boy Scouts”. Indeed the Boys Scouts of America® do use a multi-bladed pocket knife usually referred to as a “Scout Knife”. Apart from its namesake, what is, makes up, defines a “Scout Knife”, and where did it come from?

This pocket knife featured the 4 distinct tools that folded into the handle, defined its utility, and has carried over to this day.

The knife we know today in the USA as the “Scout Knife” can arguably trace its roots back to the original “Soldier’s Knife” designed by Karl Elsener for the Swiss Army in 1891. This pocket knife featured the 4 distinct tools that folded into the handle, defined its utility, and has carried over to this day. There are many that consider this as the first example of a “multi-tool”. The 4 distinct tools which were first found together in the Swiss Army Soldier’s Knife of 1891, and found in the Scout Knife of today are:

All of the 4 tools snap into place when opened and are firmly kept in place by tension with a back spring latch and are generally known as “slip joints”. The tools do not “lock” into place, but require a reasonable amount of pressure to open and close to prevent almost all accidentlal openings, but as the slip joint type pocket knife does not lock the tools in place, some care in how one uses this style of pocket knife is required. Understanding how a slip joint pocket knife physically operates will prevent careless and unintentional closing of the tools when deployed and in use.

The Scout Knife as we now recognize it in the USA with these 4 tools, a “jigged bone” handle with double bolsters, and lanyard bail, probably had it’s first appearance in WWII as a “US Military Utility Knife”. Exact dates of “issue” of this pattern knife are difficult to pinpoint and verify, as much of this documented history has disappeared and even the many manufacturers (if still in business) of this knife no longer keep or have these records. Vintage examples still exist with various markings showing its use by the US Army, USMC, and US Navy. An all stainless steel handled version of this US Military Utility Knife known as the MIL-K-818D (NSN 5110-00-162-2205) appeared around the mid to late 1940s, was issued and in service for many decades up until around the 1990s.

During its time with the US Military, this utility knife also was referred to as the “Demo Knife”, “demo” being short for “demolition”, based on a misinterpretation that this knife was non-magnetic and therefore could be used for demolitions work, aka explosive ordnance or disarming landmines. Good thing most soldiers understood that this was not true, but the nickname stuck. The “Demo Knife” even found its way into US Army Special Forces lore and was referred to as such, in a popular Special Forces verse. In this verse, the knife’s utter practical utility, reliability and high regard was placed on the same level as a Special Forces trooper’s Rolex watch.

Somewhere in the last half of the 20th century this style of pocket knife, certainly for its practicality and utility was “adopted” by the Boy Scouts of America®. There have been and are now, many production runs of this knife with the official BSA seal. The 4 basic tools can tackle probably 99% of all field and camp chores any Boy Scout or outdoors person could imagine. The Scout Knife is not a “big” knife. They usually are about 3.625” closed, the main blade is about 2.5”, and when fully opened about 6.125” OAL. The smooth capsule like shape makes this knife easy to pocket, and the lanyard bail allows the attachment of a piece of paracord or leather thong to use as a “dummy cord” to prevent accidental loss. While the moniker of “Scout Knife” now typifies this style of pocket knife, its use and utility extends far beyond the BSA and is in the hands of any kind of user and outdoors person.

The Scout Knife is a great example of an enduring and functional heritage design which has held up for well over a century and is still going strong. The 4 standard tools truly handle just about any camp chore. Some later versions added on a 5th tool in the form of a Phillips head driver. There are many levels of quality for the Scout Knife and depends on the manufacturer. A quality made example will last more than a generation. It is an indispensable tool that a parent can pass on their children. There are many “modern” iterations of the Scout Knife using polymer and plastic handles and such, but there is something timeless and classic about a Scout Knife made with traditional benchmade methods and handle materials such as jigged bone or stag horn, which speak of a time before the widespread use of plastics.

While a knife is useless unless you have it with you when you need it- if there is the “one knife” to have in your pocket, your pack or glove box, the Scout Knife is a more than worthy choice. Sure, there are some really impressive pocket knives being made today with more than 4 tools, but there is something to be said where “less is more” when it comes to this particular knife. It will do everything you need it to do, do it well and without fuss. Form, function, legacy and soul; this is the Scout Knife. An American classic knife for the outdoors, EDC and one of Danger Ranger Bear’s favorite things.

Things can seem tremendous the first period one goes to order spy apps for mobile phone. What aspects families think when they are going to use how to catch a cheating husband? Here we discussed at some key matters to keep in view, as well as how you can find options to start. What is the most momentous information you should know about catch a cheating spouse? Probably either adult knows about “how to catch your boyfriend cheating“. Sure, before you go and purchase the spyware, you must know a little bit about the purveyor. However, you have to understand one fact that there are wide ranges of spyware are available depending upon your needs. Utterly, we cannot deny the fact that price is not always a perfect indicator of quality. Thankfully, any good purveyor usually will allow you to upgrade a sofware later on if required, so don’t feel as though you need to start off on a plan that costs more than you need.

About the Author: Otter

Otter (Lontra canadensis) the North American River Otter thrives in water, land, and snow and considers all these places his stomping grounds. He believes that the best meals are enjoyed outdoors, welcomes any challenge that comes his way and turns it into fun. He is highly adaptive to the aquatic environment having webbed feet and a swimmers body, and ears and nostrils that shut when diving. His thick fur coat keeps him warm and water-repellent in and out of the water year round. Otter aka Patrick Ma is the Founder of Prometheus Design Werx and the Chief Danger Ranger at DRB. Patrick has been active in the wilderness his entire life and spent most of his youth in the mountains of Pennsylvania and Upstate New York. When not designing and developing new products for PDW and DRB, he can be found using them somewhere in the Californian backcountry with his wife and two otter pups.

4 Responses to The Scout Knife