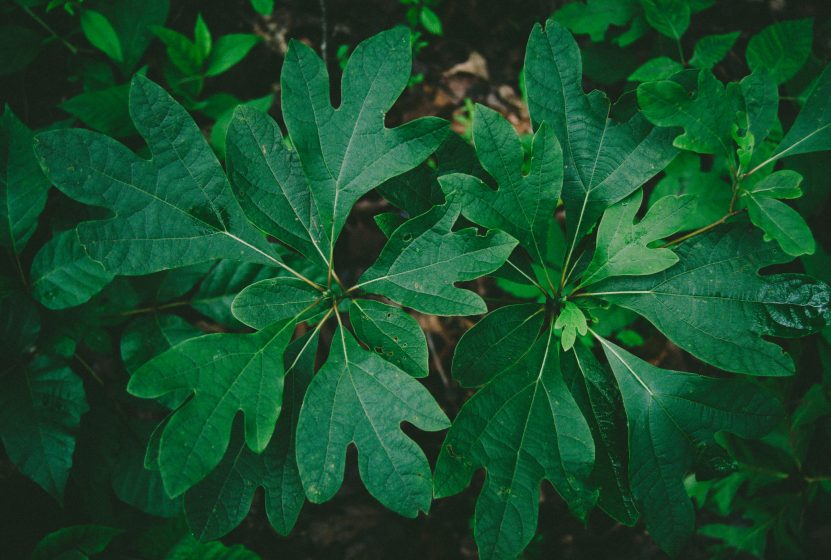 The Sassafras tree (Sassafras albidum) is a member of the laurel family. Nicknamed the mitten tree it is often found along hedgerows and open fields, the towering sassafras has been a food source for wildlife and humans alike. The tree’s crushed leaf or broken twig releases the Sassafras’ trademark aroma of cinnamon, citrus, or even a fruity breakfast cereal.

Sassafras trees are found along forest edges, in hedgerows, and in open fields throughout most of the eastern United States and west to Missouri. The tree prefers sandy, well-drained soil in full sun and often starts in abandoned fields as a pioneer species.

Sassafras grows about 60 feet tall and has a bushy appearance due to the many suckers that shoot up around the tree’s base. The sassafras also sends out root sprouts that eventually form a dense colony, leading to the rapid expansion of the trees in a particular area. It is estimated that some trees have lived over 300 years.

The easiest way to identify sassafras is the tree’s smooth mitten-shaped leaves. The leaves are 4-6 inches long and are slightly fuzzy at first. While most leaves are mitten-shaped, some are ovals or have several “fingers.” By mid-fall, the leaves shift from bright green to yellow, orange-pink, and red-purple.

Sassafras leaves release a sweet, strong fragrance of cinnamon and citrus when crushed. Some say it smells like root beer. This would make sense since Pharmacist Charles Hires used sassafras in his formula for “root tea” in 1875. A friend of Hires suggested that using the word beer instead of tea would have a wider appeal, especially to the working class of the industrialized USA and it did. In 2021 the global root beer market size was estimated to be worth over $728 million dollars!

As if the sassafras didn’t have enough uses already, the fragrant wood of the tree is quite heavy and was used in boat building and making beds. The small twigs were used to make toothbrushes.

Sassafras bark is thick with deep furrows with a grayish-brown exterior. The inner bark is a dark reddish brown, similar in color to cinnamon. An even more pronounced scent comes from the snapped branches, bark, and roots. The bark can also be used to make an orange-colored pigment.

In spring, the sassafras produces delicate pink blooms at the terminal end of its branches. Fertilized by bees and small flies, those flowers will eventually develop into clusters of small dark blue berries with red stalks by late summer and early fall.

Black bears and wild turkeys dine on the ripe sassafras berries, while white-tail deer and porcupines feed on the smaller branches and leaves. During the winter, beavers and cottontail rabbits will add the tree’s tasty bark to their diet.

Sassafras is also the host plant for the spicebush swallowtail butterfly and Promethea moth, as well as more than 30 other butterfly and moth species.

Native Americans have used various parts of the sassafras for medicinal purposes. Roots and berries were made into teas to treat fatigue, diarrhea, insect bites, lice, and even syphilis. It is also a diuretic.

The roots were also used to make antiseptic and pain-reducing poultices for skin infections, sores, and deep wounds.

European settlers quickly discovered safrole, an aromatic oil pulled out of processed sassafras bark. This oil became so popular that sassafras trees along the eastern seaboard were cut down and shipped to England. The fragrant oil was used in soap, fragrance, and toothpaste.

Until the early 20th century, the English made a popular drink called “saloop,” a mixture of sassafras tea, milk, and sugar.

Scientists later discovered that in concentrated quantities safrole has carcinogenic properties, so it is no longer used to make root beer or other foods. However, the leaves and roots, taken in small quantities, are considered harmless. The concentrated safrole is also a hallucinogen that’s used in making ecstasy also known as methylenedioxyamphetamine (MDA).

File, a powder made from ground sassafras leaves, is still a primary ingredient in cajun cuisine, particularly Louisiana Gumbo. – Even the government knows not to mess with Lousiana and their Gumbo!