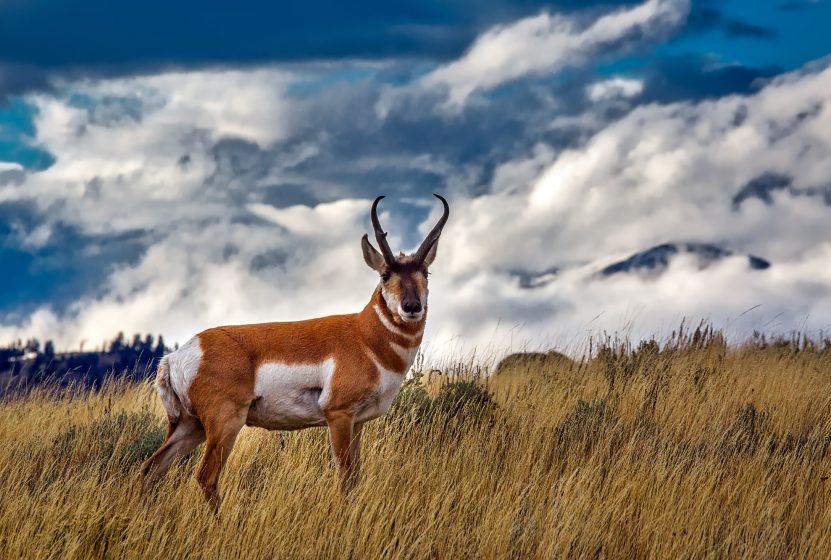 This North American pronghorn (Antilocapra americana), also known as the “speed goat” or “sage rocket,” is a deer-like resident of the American West. Racing across grasslands and deserts at speeds up to 60 mph, the pronghorn is the sole surviving member of the family Antilocapridae (order Artiodactyla).

The pronghorn’s earliest ancestors appeared in the fossil record 20 million years ago and continued to expand and evolve with fossils identified of at least 12 different species. While not related to the African or Asian antelope, the pronghorn is one of the few surviving species of the Ice Age and evolved along with the now-extinct American Cheetah.

Today’s pronghorn is found from Saskatchewan, Canada, south to Mexico and inhabits the Great Basin, Mojave, Sonoran, and Chihuahuan deserts.

The pronghorn has a tan to reddish-brown body with a white chest, cheek, belly, rump, and inner leg. The male has a broad black mask that runs from its eyes down the snout to its nose. The female does not have black face markings.

Both sexes have black horns. The male’s curve in towards each other and are 12-20 inches long. The female’s are straight spikes between 3-4 inches long.

Unlike deer and elk, the pronghorn has horns, not antlers. The horns are made of a bony core covered by a sheath made of a stiff hair-like material. The outer sheath falls off every autumn and grows back the following summer.

While the pronghorn can use its horns for defense against predators, its true weapon is eyesight, a layered early warning system, and speed.

The pronghorn will also excrete a musk that can be detected more than a mile away.

And when the time comes to make a fast getaway, no other animal does it as fast as the pronghorn.

The modern pronghorn is the fastest animal on the continent and can outrun all predators. Adults can sprint at speeds up to 60 mph and sustain 45 mph for several miles without showing any signs of exhaustion. These speeds also make them the second fastest animal in the world, falling just behind the African cheetah.

Built for maximum velocity, pronghorns weigh between 90-120 pounds and stand about 42 inches tall at the shoulder. Their front hooves are larger than the rear hooves and have pads that cushion the leg bones from impact, much like shock absorbers.

The animals don’t have collarbones which give them a more extended range of front leg movement. In fact, a pronghorn can cover nearly 30 feet with each running stride when the animal is at full speed. At this speed, a pronghorn can cover the length of a football field in less than four seconds, taking only 10 strides.

Pronghorns also have super-powered cardiovascular systems. Their hearts are three times bigger than goats of a similar size, and their lungs have five times the surface area.

Pronghorns live in herds that fluctuate in size based on the time of year. Females and their young band together in the summer with less than a dozen members in the herd.

Males under two years of age form bachelor herds, and older males establish individual territories. Males and females will combine herds during the winter as they migrate from summer to winter feeding grounds.

The pronghorn diet is primarily grasses and cactus during the summer and sagebrush in the winter.

Pronghorn mating season takes place in late summer and early autumn. The males work to herd groups of females. As soon as a female is ready to mate, she escapes the herd and leads the males on a chase. Once the males have started, the female stops and watches the males fend off other challengers and then chooses the victor as her mate.

If the mating is successful, the female gives birth to one to two fawns in late May or early June.

Pronghorn fawns are nearly odorless at birth to keep them from being detected by predators like coyotes, wolves, and mountain lions. The fawns will stay hidden in the grass for the first few days and join the herd when they are about a week old.

While the pronghorn’s speed has kept the species out of harm’s way for millenia, it’s Achilles Heel is its ineffective vertical jump. That weakness is what allowed indigenous people to make the pronghorn a significant food source while using hunting techniques that negated the animal’s speed and took advantage of its inability to jump over barriers.

The Crow would drive pronghorn towards barriers that would funnel them into enclosures where they would be killed. Once other tribes had horses, they were more easily able to surround herds and harvest them with lances, arrows, and later, repeating firearms.

With much of the pronghorn’s habitat being converted to fenced rangeland since the mid-1800s, the animal’s migration routes have been altered, or outright eliminated. Over the decades, these alterations have threatened the pronghorn’s long term survival.

Over a century ago, there were millions of pronghorn roaming the continent alongside the American bison.  Those numbers dropped to 20,000 in the 1920s and thanks in large part to conservation efforts, have rebounded to nearly 1 million animals today.