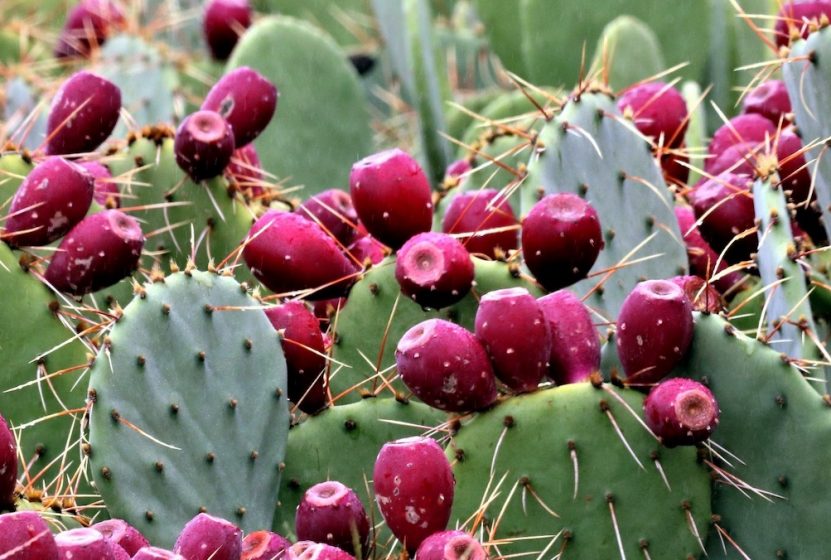 The Prickly Pear Cactus, known more formally as Opuntia is probably one of the most recognizable Cacti in the world. With dozens of variations it is originally from the Americas in what is now Central Mexico, but Opuntia has radiated out to arid and semi-arid regions all around the world.

Said to be given to the Queen Isabella of Spain by Christopher Columbus they are now common throughout the mediterranean, Africa, India, the Middle East and Australia. In north America they are very common and can be found from Mexico up across the U.S. and into Canada.

Depending on where you are, you may hear it called Bunny Ears Cactus, Eastern Prickly Pear, Texas Prickly Pear, Beaver Tail Cactus, Wheel Cactus, Indian Fig, the Barbary Fig and so on.

The Prickly Pear enjoys living in quick draining sandy and rocky soil and grows equally well on flat land or along slopes. Due to this they are planted to prevent erosion. As an extra bonus they increase the amount of nitrogen in the soil where they grow.

Their shape is instantly recognizable for its oval shaped branches usually covered in spines which are actually modified leaves of the plant. Color can range from deep green, yellowish-green to shades of purple.

Like other desert dwellers and succulents it has adapted to life in arid climates that may get as little as 6 to 12 inches of rain in a year by hanging on to moisture any way it can.

For times when there is rain the Opuntia is able to store vast amounts of water in its pad shaped branches for later use during dry spells.

Once water is onboard the plant works hard to keep from losing it to evaporation. The Cactus’ entire outside including the flowers have a waxy coating to trap water inside. As noted the spines of the plant are actually the leaves which limits surface area and further prevents evaporation.

All plants have pores called stoma that open and close throughout the day to allow gas exchange. Opuntia only open these portholes at night when it is cooler and there is less chance of losing precious water to evaporation. The Cactus actually stores the carbon collected at night and then after the sun rises completes the photosynthesis process.

Another interesting action that improves efficiency takes place in the yellow, white or red flowers of the Cactus. When a pollinator like a bee lands in the flower the stamen actually contract like a friendly Venus Fly Trap so more pollen is brushed off and collected on the bee’s body. This action also helps close off the nectar that is deeper in the flower to prevent non-pollinators from getting a fee sip.

Prickly Pear is also a friend to other desert locals by providing a juicy nibble to tortoises, iguanas, rabbits, deer, peccaries, and many species of birds. The cactus also provides a shelter with a built in security system for a variety of rodents, reptiles, and birds such as the cactus wren.

Animal aren’t the only ones who get food and shelter from the Prickly Pear Cactus. Humans also use the cactus as natural security fencing and fodder for cattle. It is also utilized as a building material in adobe construction both as an addictive to help bind the mud and also to provide waterproofing in roofs.

Since the beginning humans have also chowed down on the Opuntia. Whether you call it Cactus Fruit, Cactus Figs or Prickly Pear it is delicious. Known south of the border as Tuna or Sabra it is a popular food. Ripening throughout the summer the usually red fruit tastes similar to watermelon and as time goes by the sugars concentrate making it very sweet.

This sweetness lends itself to making jelly and syrups and is even used in flavoring juices and mixed drinks. If you find them in the wild just MAKE SURE to remove all the glochids. Opuntia are related to the Teddy Bear Cactus and have similar tiny yellow, hair like splinters that are easily brushed off into your skin and will drive you crazy. If you ever come in contact with them and tweezers aren’t handy duct tape is a good way to pull them out.

The glochids can be removed from the fruit either by singing them over a fire (listen for the cracking to stop) or very careful peeling with a knife. Native Americans in the Southwest would also roll them around on the ground until all the glochids were worn off. Inside you will find the juicy flesh of the fruit and edible seeds.

Beside the fruit humans have been eating the Nopales or the green pads of the cactus for time immemorial. The best ones are taken when they are young and tender. After all the defense mechanisms have been removed they can be boiled or grilled and used many different ways.

Nopales have a subtle tart citrusy flavor and add extra texture. The added crunch and flavor are popular in chorizo scrambled eggs, salads, relishes, salsas or even as the main attraction in tacos.

Nopales are also thought to help with hangovers so you might want some near after a night of Prickly Pear Margaritas. You can find them in jars at most grocery stores or buy them fresh, cleaned and uncooked at hispanic markets.

So if you encounter a Prickly Pear Cactus, treat it with respect and it will offer you many more surprises than just a sharp poke!

3 Responses to The Prickly Pear Cactus