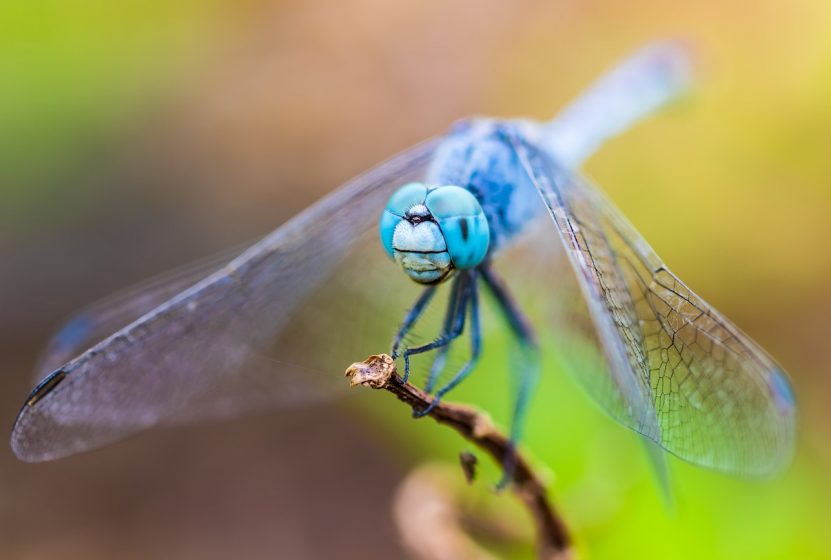 Dragonflies are members of a very large insect family Odonata (toothed ones) made up of over 5,000 different species. Their ancient relatives had over two-foot wingspans and ruled the skies over 300 million years ago. These days the largest Dragonflies “only” grow to have about six-inch wingspans.

Besides being thankfully much smaller their basic form hasn’t changed that much. Their heads look like a modern fighter pilot’s helmet with two large compound eyes that give them almost 360-degree vision. Below this, their mouth has two large mandibles which earned them their toothy scientific name. They have six legs for use as landing gear and trapping prey.

Most eye-catching is the Dragonfly’s four wings that still make modern engineers jealous. Each wing is independently controlled by its own muscles that adjust the pitch, speed, and angle of each wing. This gives the Dragonfly the ability to fly as fast as 30 miles per hour, make sudden changes of direction, and hover.

Their wings aren’t just made for aerobatics but are also capable of long-distance flight of ten or more miles a day and in one species a 10,000-mile migration.

Their sharp eyesight, legs, mandibles, and precision flying make them the top guns of the natural world catching their prey only when in flight with a 90-95% success rate.

You may notice Dragonflies are most prominent in the summertime which is when they reach the adult stage of their three-part lifecycle.

In the beginning, an adult female lays her eggs in freshwater usually attached to an aquatic plant. After ten days or so the eggs hatch and the Dragonfly larvae or nymph emerges.

For several weeks to a year, the brown camouflage-colored nymph waits out winter and lives underwater hunting mosquito larvae, tadpoles, and even small fish- Yikes! As it continues to grow the nymph will molt several times shedding its exoskeleton as it gets too tight.

During summer the grown dragonfly will emerge from the water and molt one more time by inflating itself with air to expand and split its underwater outfit.

What emerges is the colorful and winged adult Dragonfly we all recognize especially after the abdomen telescopes out into the long slender form better suited for flight.

Once an adult the dragonfly usually stays near a water source and hunts eating as many as 100 flying mosquitos in a day.

The more dragonflies you see generally the better the quality of the water and as an added bonus they help control mosquito populations which is a victory for all campers and dragonflies alike!

One Response to The Dragonfly