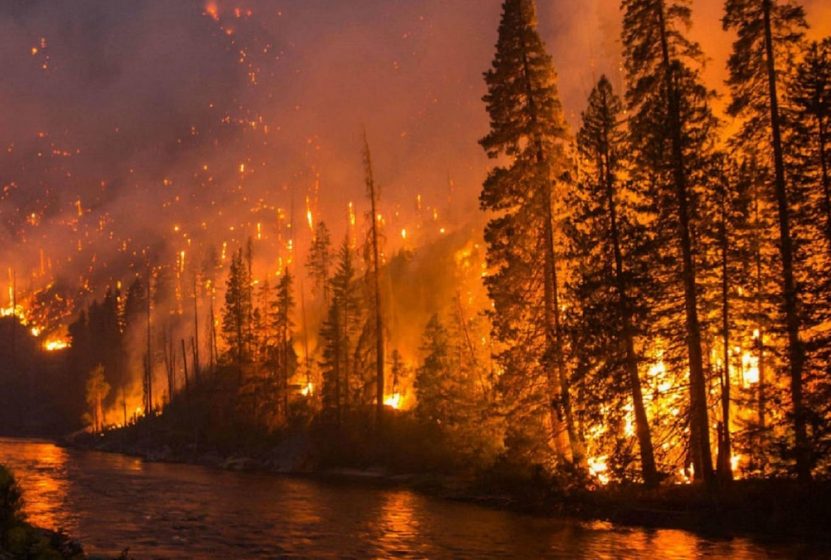 As a wildfire advances, its heat and smoke will dry out the materials in front of it. This creates a domino effect where one piece of fuel catches fire and makes more combustible fuel in surrounding materials. Wood, for example, has a flashpoint of 572 degrees Fahrenheit. When it’s heated to this temperature, it releases gases that mix with the surrounding oxygen and combusts.

The wind is the most unpredictable yet significant player when it comes to influencing a wildfire’s behavior. Wind supplies oxygen pushes the fire along the terrain and helps dry out potential fuel.

More massive and hotter fires also develop their own wind patterns that can be as many as 10 times faster than ambient winds. Vortices generated by the fire’s heat create short-lived fire whirls. If a sustained fire whirl can evolve into the relatively rare phenomenon known as the firenado. A firenado killed 8 people and destroyed more than 1,000 homes in Northern California. in 2018. The National Weather Service determined the firenado caused the damage equivalent to an EF-3 tornado with winds over 143 mph.

A top contributor to the rise of wildfires is the pine bark beetle. This ¼-inch long insect creates millions of acres of combustible materials by laying eggs under a conifer’s bark. This process introduces a fungus that prevents sap flow and keeps the tree from repelling additional bug attacks. The tree dies and rapidly dries out, creating a new potential fuel source for the next wildfire. The U.S. Forest Service estimates that beetle infestation results in 100,000 tree fall every day.

After fireweed, grasses, and trees like the birch, alder, and aspen began to thrive, sometimes sprouting from the stumps of burned trees. These new-growth forests live from 20-50 years. They further condition the soil to allow the development of the mature forest to begin.