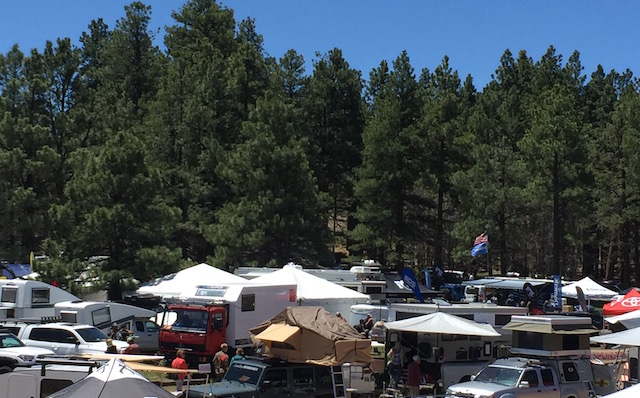 If you have been following the DRB Instagram you know we took a road trip out to Flagstaff Arizona for the 2016 Overland Expo. (and if you haven’t been following the DRB Instagram you should) Taking place over four days, the Expo features just about any form of transportation that can take you out into the wild: from every style of 4×4 imaginable, to kayaks, mountain bikes, motorcycles- their were even mopeds and an ultralight aircraft. But no matter the conveyance the message was the same- get outdoors and make the most of it while hopefully expanding your knowledge, skills and capabilities by way of the various venders, classes and demonstrations. 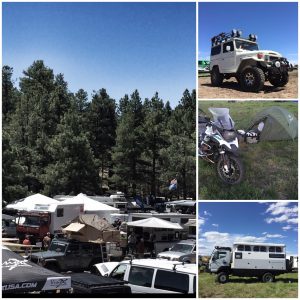 Unlike a similar type of exposition held in a climate controlled convention center, Overland Expo is all about camping and dealing with whatever Mother Nature throws at you. In previous years that meant heat and dust, in 2015 there was snow, ice and mud which Expo veterans recall with pride for having been there and overcoming the challenges. This year the wind was almost always blowing with some gusts in the 40 mph range. This made proper tent staking and tying down gear with paracord a must. Still, in the night you could hear the tearing of canvas and falling equipment, but after a long day I just pulled my sleeping bag over my head and pretended the snapping sounds of my tent’s rain fly was a spinnaker on a sail boat.

Held at Mormon Lake Arizona, as one approaches Overland Expo it appears to be a modern day Silk Road trader’s oasis. Bordered by pines on one side and clustered on the lake bed’s plain are the colorful tents and various vehicles of the attendees and exhibitors interspersed in rows with their various wares. It’s among these aisles you will see the exotic, high-tech and old school in the world of overlanding, camping and exploration. There are giant earth roaming trucks that look like they were inspired by the Jawa’s Sand Crawler- self contained and able to navigate almost any terrain for weeks at a time. There are 4×4’s of every make and era -some completely kitted out with the latest in bumpers, racks, roof tents,winches and modifications. Other vehicles are in their rustic stock glory proudly showing the signs of years of use across the continents. And one can’t forget the Adventure Motorcyclists who travel the lightest of all. Further down the line are the latest tents, camp kitchens, tools, recovery gear and solar panels. Walking the aisles are people from across the world and their trusty dogs who all love the outdoors and exploring no matter the conveyance. 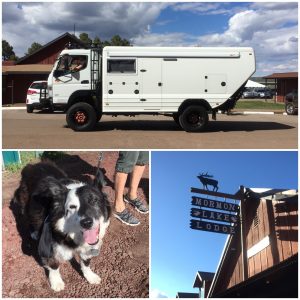 Overland Expo is well organized and the Mormon Lake Lodge offered amenities such as showers, laundry and various meal options such as the Zane Gray inspired steak housed saloon. There were also food trucks and a pizzeria available to mix it up. We opted to both cookout at our camp site and eat at the lodge which after a long day in the sun and 30 mph wind was a nice respite and reminded me of being in summer camp as a kid. Every afternoon there was a happy hour where all the attendees could mingle and during which there were presentations. By night fall most people were ready to crawl into their sleeping bags, while some went on to gatherings held by exhibitors or wandered the camp sites catching up with friends, making new ones and seeking a camp fire to stand around. (for safety reasons only non-wood fires were allowed)

All in all, I would highly recommend going to the Overland event nearest you- there is an East and West Expo held every year and It’s a great excuse to go on a road trip and it will definitely inspire you to get outdoors and use your new found skills and gear afterward. 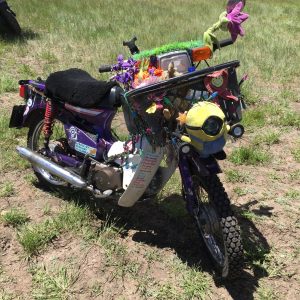