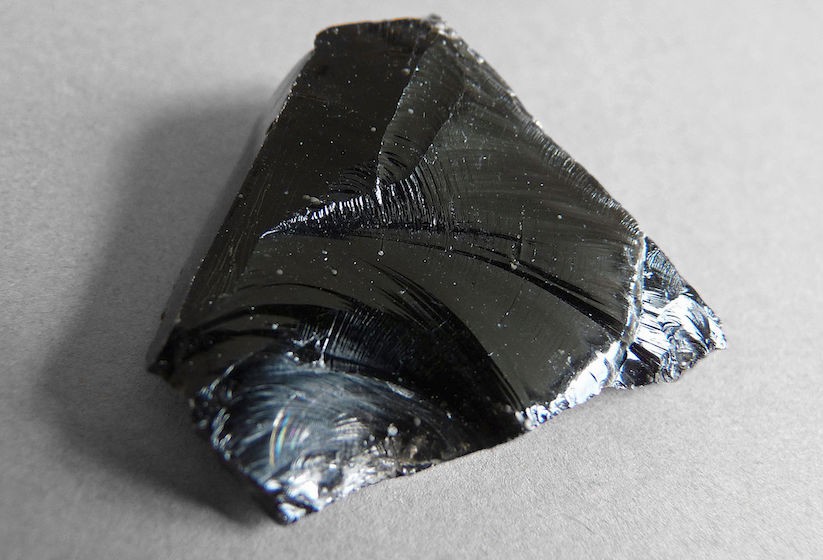 Obsidian is a type of volcanic glass that is formed when lava with high a silicon content is rapidly cooled, usually by contact with water. Obsidian is usually black or dark grey in appearance but can take on other colors due to the presence of trace mineral impurities.

The lack of a traditional crystalline structure found in other types of rock gives obsidian its characteristic flaking that forms very sharp edges called conchoidal fractures. These fractures and their sharp edges made obsidian a highly useful and sought after tool since the Paleolithic era and used by early man around the world.

The Raw Materials: A Large Deposit of Volcanic Glass at Oregon’s Newberry Caldera

In North America Native Americans living near former eruption sites would have found the obsidian laying on the ground with naturally formed edges which they used as simple cutting tools.

Over time the Indians learned to shape the volcanic glass into the forms needed to produce various tools- a process called knapping. An Indian with access to an obsidian deposit could carry a small set off tools for flaking the volcanic glass and create a useful assortment of implements such as knives, scrappers and arrow heads. The sharp and effective arrow heads made from obsidian allowed the Indians to take much larger prey and made life easier than previous blunt tipped wooden arrows that were only effective on very small game such as squirrels and rabbits. 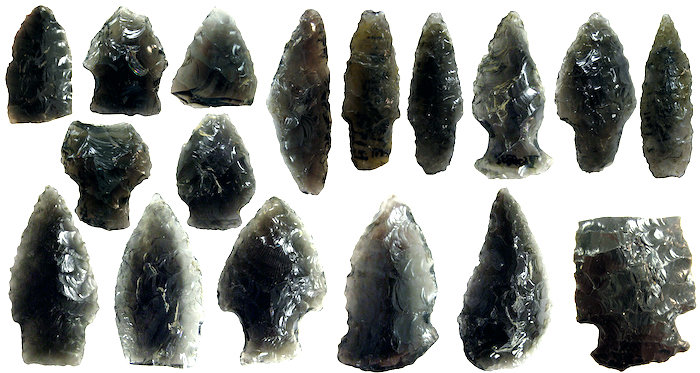 Due to obsidian’s link to volcanos, it is primary found west of the Mississippi. This scarcity lead the Indians who had access to obsidian to create an industry dedicated to the harvesting, shaping and trading of obsidian among the various distant tribes. By examining the debris at some sites archaeologists have suggested that assembly lines were used to shape tens of thousands of obsidian tools for trading purposes. Tools formed by Indians living near present day Yellowstone have been found as far away as Illinois and the Gulf of Mexico. Excavation in Europe have found obsidian tools were part of vast ancient trade routes that were a precursor the the silk road.

In the same way California tribes would form rough blanks of the tools which were then easier to transport and would be then finished off by the end user sometimes a thousand miles away.

Obsidian tools weren’t just used for hunting, recently researchers have found that specific tools were made for the purpose of tattooing. Over 3,000 years ago people living in the Solomon Island chain used charcoal from fires and ochre to create their tattoos by making tiny incisions with the obsidian and rubbing the pigment into the cuts.

In the present day, some doctors advocate the use of obsidian scalpels which are still sharper than modern steel. When viewed under the intense magnification of an electron microscope, a steel scalpel’s blade is actually jagged and thicker than its obsidian counterpart which maintains a straight smooth edge that is a mere 3 nanometers in thickness.

The obsidian blade edge is so sharp that incisions made by it create less damage and heal more quickly as the wound forms less inflammatory cells and granulation. This is quite a feat considering all of the advances in technology since man first began to use obsidian over 12,000 years ago. 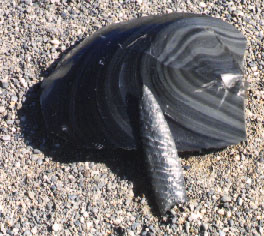