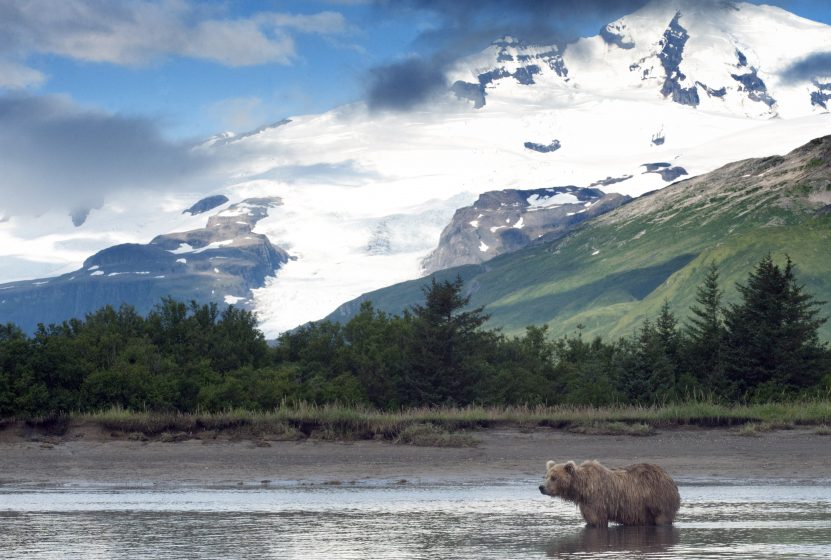 Located 290 miles southwest of Anchorage, Alaska, Katmai sits in the middle of one of the most volcanically active landmasses on earth.

The 1912 eruption of Novarupta transformed a fertile green valley that was home to wildlife and humans alike for millennia, into an ash-filled wasteland. Novarupta was the 20th century’s most massive volcanic eruption. The explosion buried some parts of the valley under 700 feet of volcanic matter. The ash fall reached as far away as Texas, and the blast was heard 700 miles away in Juneau.

Explorer Robert Grigg climbed nearby Katmai Pass in 1916. He became the first person to see the valley floor’s remnants and its thousands of steam vents, or fumaroles. He is credited with coining the name, the Valley of 10,000 Smokes.

Grigg’s efforts to preserve the area led to the creation of Katmai National Park & Preserve on September 24, 1918.

This “valley of destruction” is one of the top attractions of Katmai National Park & Preserve. Since the eruption more than 100 years ago, the Ukak River has carved gorges into the ash, creating breathtaking geologic features.

Outside of the Valley of 10,000 Smokes, Katmai shimmers with life and color. In addition to bears, more than 40 other mammal species live within the park’s coastal and lake regions.

But perhaps the park’s most famous attraction is the brown bear (Ursus arctos). Katmai is home to North America’s largest protected population of brown bears, one of the world’s largest living terrestrial members of the order Carnivora. About 2,200 brown bears live in the park, and more bears than people live on the Alaska Peninsula.

Between 75-100, brown bears gather along the Brooks Falls on the Brooks River to feed on the massive summer sockeye salmon run. The annual event brings in tourists from around the world and creates one of the Internet’s more popular live streams.

At least 14 active volcanoes are within Katmai’s boundaries, with around 80 major volcanic centers located in the Alaska Peninsula and the Aleutian Islands.

Parts of the Aleutian Range are within the park’s 4.2 million acres. Higher peaks are volcanoes that steeply rise from the coastline to elevations higher than 7,000 feet. Glaciers surround many of the mountain slopes, with a handful descending almost to sea level. The park’s largest glaciers are up to 12 miles long and four miles wide.

Katmai’s northern region is known as the “lake region.” The centerpiece is the park’s largest lake, Naknek Lake. The 40-mile-long lake is fed by glacial waters and drains into Bristol Bay via the Naknek River.

Situated near the mouth of the Brooks River and the shore of Naknek Lake is the popular campsite Brooks Camp. Protected by an electric fence, campers can watch brown bears swim and stroll along the beach and fish along Brooks Falls.

The Brooks River has been a hub of human activity for at least 9,000 years.

Due to similarities in tools and remains, archaeologists believe some of the area’s earliest residents may have crossed over the Bering Strait land bridge by foot or boat.

About 5,000 years ago, Naknek Lake and Brooks Lake were one body of water. As the centuries passed, the Naknek River began to cut through the glacial moraine that dammed the lake, lowering its level and ultimately creating two separate lakes.

Most of Katmai’s indigenous people were of Alutiiq/Sugpiaq descent — one of the eight Alaska Native peoples. Their primary food sources were salmon, halibut, and whales. Land mammals and berries provided secondary sustenance based on the seasons.

Russian explorers arrived in the Katmai area in the 1740s, and European fur traders soon followed.

There were four year-round villages in the area until the 1912 Novarupta eruption. Due to the heavy ash fall, the residents left Katmai and resettled elsewhere along the Alaska Peninsula.

Unconnected by roads to any town, today’s visitors can only reach the Katmai National Park & Preserve by a two- or three-hour floatplane flight from Anchorage or Homer.

In addition to world-class bear watching and fishing, many wilderness adventurers come to Katmai for epic backcountry camping or canoeing and kayaking the 86-mile Savonoski Loop. Experience traveling in bear country is highly recommended.

One Response to Katmai National Park and Preserve