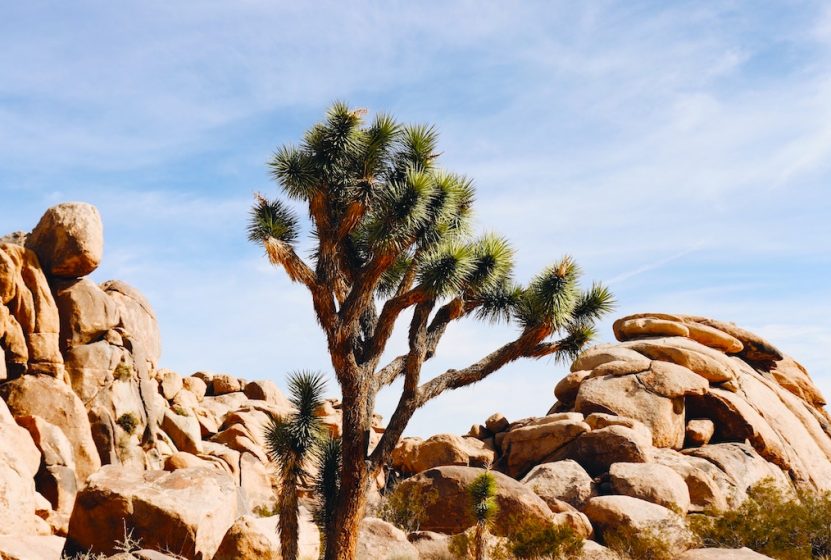 Nicknamed “J-Tree” by locals, Joshua Tree National Park sits at the crossroads of two deserts, where the low Colorado Desert meets the high Mojave Desert. Named after the thousands of Joshua Trees inhabiting the area, the 800,000-acre park is a treasured desert wilderness located within a few hours from the urban centers of Los Angeles, Las Vegas, and Phoenix.

While humans have lived in the Joshua Tree area for at least 5,000 years, commercial development in the late 1920s introduced new roads, home builders and cactus thieves who were ferreting away fragile desert plants to decorate Los Angeles gardens.

A Pasadena socialite and activist, Minerva Hamilton Hoyt, was concerned about the harmful effects plant poaching and increasing development was having on the area. Her lobbying efforts gained traction with President Franklin D. Roosevelt’s administration which resulted in 800,000 acres being designated Joshua Tree National Monument on August 10, 1936.

The area was later re-designated as Joshua Tree National Park on October 31, 1994, when the U.S. Congress passed the California Desert Protection Act.

As its name implies, the park is home to one of the larger populations of Joshua trees (Yucca brevifolia) in the world. Across the park’s 800,000 acres, this species of yucca plant — which only grows in the cooler and higher elevation Mojave Desert — can be found in dense forests and as well as pockets of isolated specimens.

Another dominant feature in the desert park’s geology. Scattered throughout the area are large chunks of bare rock and loose boulder piles which are primarily composed of quartz monzonite. This makes Joshua Tree National Park a bucket-list trip for climbers during the winter months when the weather is temperate. The area has thousands of routes and countless boulder problems with “grippy” rock.

The Hexie Mountains separate the two ecological zones of the Mojave Desert and the Colorado Desert, a part of the Sonoran Desert. The Mojave Desert, which is located in the northwestern park area, is a high desert ecosystem that averages two inches of rain a year and is generally between 2,000 and 5,000 feet in elevation. The Colorado Desert, located in the eastern and southern part of the park, averages about three inches of annual rainfall and is around 3,000 feet in elevation.

The park is also home to a smaller third ecological zone that features five fan palm oases sprinkled throughout the park. Due to geologic faults that have brought water closer to the surface, the towering palm trees can thrive in this otherwise arid climate.

Early inhabitants were part of the Pinto Culture, a mobile hunter and gatherer who ranged through the area four to eight thousand years ago. Native American tribes like the Cahuilla, Chemehuevi, and Serrano arrived in the area approximately 400 years ago.

These tribes found plentiful plant food resources such as cactus fruits, mesquite pods, acorns, and pinyon nuts. More than 120 plant species were used for food and medicine. They also used other desert plants like the yucca and palms as raw materials for cordage and baskets, as well as making bows and arrows.

European explorers, ranchers, and miners arrived in the area in the late 1800s with homesteaders showing up in the 1930s in the pursuit of free land. That rapid growth ultimately drove Minerva Hamilton Hoyt’s efforts to protect the region and giving us the park we can all enjoy today.

Approximately 2.8 million visitors pass through the Joshua Tree National Park each year, with the busy season taking place in the cooler months of mid-October to early May. Popular activities include rock climbing, hiking, camping, and photography. Due to the low light pollution, the park is considered one of the top locations for star photography (astrophotography).

There are 32 trailheads and 191 miles of hiking trails running through the park. A popular hike is the seven-mile Willow Hole Trail which takes visitors to the Wonderland of Rocks area which is known for its scenic views and colorful wildflowers.