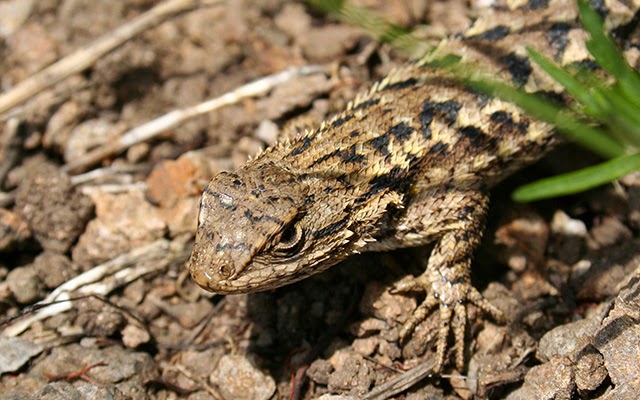 The blue-belly lizard aka the Western Fence Lizard (Sceloporus occidentalis) is one of the most common of lizards found in California. They range from sea level to the mountains and only avoid open desert and wet forests probably due to the need for external temperature regulation. The blue-belly gets its nickname from the colorful patches along the abdomen and throat area that can run from a pale blue to almost turquoise. This coloration is most prevalent on adult males and used to impress lady lizards. On top, their colors reflects their environment from near black to sandy browns and yellow stripes on their thighs. Their scales have a rough look that is almost shaggy in appearance, which can help an observer differentiate it from other lizards such as the common sagebrush lizard.

Blue-bellies get their common name Western fence lizard for their habit of climbing vertical surfaces to sun themselves in order to maintain body temperature.

Blue-bellies get their common name Western fence lizard for their habit of climbing vertical surfaces to sun themselves in order to maintain body temperature. Probably all children have tried to catch a blue-belly at one time or another. One common trick is to make a slip knot out of a long piece of grass or reed and slip it over the lizard’s head. The blue-belly does not crawl backwards and is easily snared. Catching them by hand can be trickier due to their fast reflexes and a “third eye” on top of their head that senses changes in light. If your shadow crosses this sensor the lizard will usually get away. Blue-bellies are also helpful fellows, they eat mostly insects and some research has shown they help curb the spread of lyme disease. Scientists have discovered that ticks who drink the blood of blue-bellies ingest a protein from the lizards that kills the disease causing bacteria. Another oddity of the Blue-belly is its susceptibility to being “hypnotized”. If he is caught and the belly is gently rubbed, the lizard will go limp for up to five minutes. Always remember to be gentle with the blue-belly or you may detach his tail which will convulse to act as a distraction to predators. This is probably really annoying to him since he will have a stump on his rear until his tail regenerates. 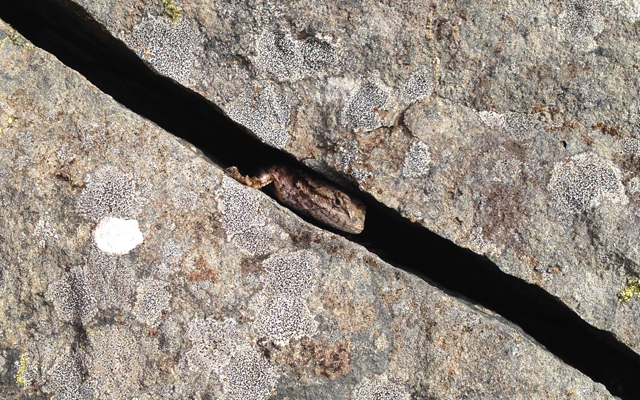 15 Responses to The Blue Belly Lizard