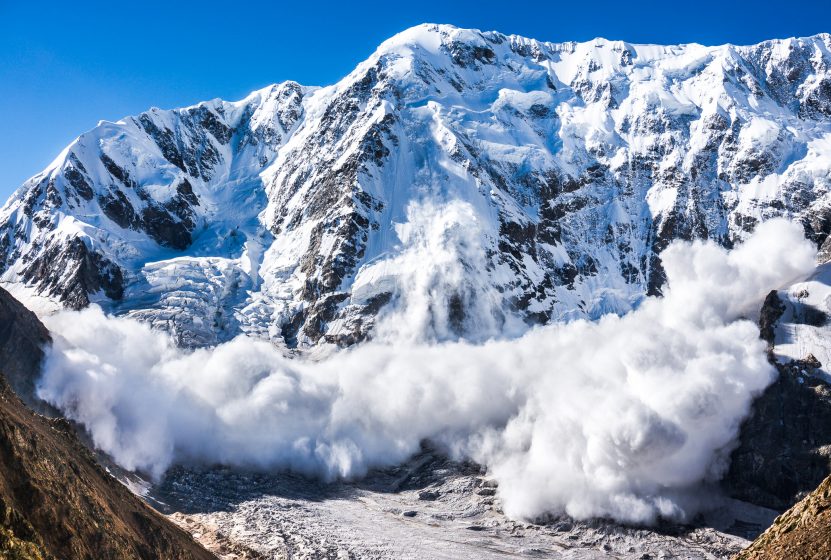 Traveling in the mountains during the winter presents several challenges for the outdoor adventurer. Hikers, climbers, and skiers all have to deal with fast-changing weather, altitude sickness, extreme cold, as well as exposure to lightning and high winds. However, the most terrifying hazard may be preceded by the last sound you ever want to hear in the mountains — the “whoomph.”

The “whoomph” is the noise powdery snow makes as it compresses, shifts, and is about to start sliding downhill.

This loud, low drum sound is the start of an avalanche.

In the western U.S., there are about 100,000 avalanches each year in the mountains. According to the American Avalanche Association,  these snow slides kill between 25-30 people every winter.

A snow avalanche starts when an unstable section of snow shears away from the mountain slope. As this mass moves downhill, it accelerates and creates an undulating snow river, pushing a cloud of icy particles skyward.

The sluff avalanche occurs when a weak snowpack layer is on the surface. The sluff is a small slide of dry, powdery snow and typically moves without any form or shape. This type of avalanche is far less dangerous than a slab avalanche.

The slab avalanche occurs when the weak layer is lower in the snowpack. Covered by other layers of compressed snow, this layer often sits on the sun crust. A sun crust is created by snow melted by the heat from the sun and then refrozen. Sun crusts only form on sunny slopes on southeast, south, southwest, and west-facing slopes are the prime suspects for creating avalanche conditions.

When the slab avalanche is triggered, a weak layer breaks off and takes all of the layers on top of it down the slope. These layers then tumble and fall as a giant block or slab. This slab continues to break into separate smaller pieces as it moves downhill.

The layers are weakened by different temperatures within the snowpack. The varying temperatures create water vapors that form ice crystals as they move toward the surface. These crystals weaken the snow layers and lead to the upper layer’s collapse and slide. Since the crystals reduce friction, they also contribute to the avalanche’s speed as it races downhill.

As the snow mass moves down the mountain, it picks up even more snow. A fully developed avalanche can weigh up to one million tons and travel at speeds faster than 200 mph.

Avalanches typically start in one spot and can be activated by natural triggers such as new snow loading and cornice falls. They can also be triggered by explosive charges and human activity on the snowpack, like hiking, climbing, skiing, and snowmobiling.

Heavy snowfall or rain can make the snowpack unstable for several days.

Currently, scientists cannot predict when and where avalanches will occur. Still, they can estimate avalanche hazard levels by measuring temperature, wind, and snowpack.

Avalanche indicators are signs of recent avalanches, visible cracking in the snow’s surface, and collapsed sections of the snowpack. Of course, there is also the “whoomph” which means the snow is shifting.

Always check avalanche conditions when traveling in the mountains in the winter. If you’re venturing in the backcountry or non-groomed ski areas, you should wear an avalanche beacon. This small transceiver emits a consistent beep when activated out to 80 meters. The beacon is strapped to your waist and over one shoulder and worn between your base and outer layers.

If you find yourself about to be engulfed in an avalanche, your objective is to get off the slab and out of its path. Skiers can try to head straight downhill to increase speed before veering to the side of the avalanche.

If you can’t get out of the way and are caught by an avalanche, try and “swim” upward toward the surface. Since your body is three times denser than snow, you’re going to sink and get buried.

The rapidly moving snow actually heats up and melts during the slide and then rapidly freezes once it stops. This creates a concrete-like tomb around your body which makes movement nearly impossible. Try to clear a space in front of you to breathe.

Most avalanche deaths are not from blunt trauma but from carbon dioxide poisoning. Carbon dioxide builds up in the snow surrounding your head with each exhalation and quickly reaches toxic levels. This is why time is of the essence with avalanche rescues. Many victims can be recovered alive if dug out within the first 15 minutes. The success rate drops off catastrophically beyond that point.