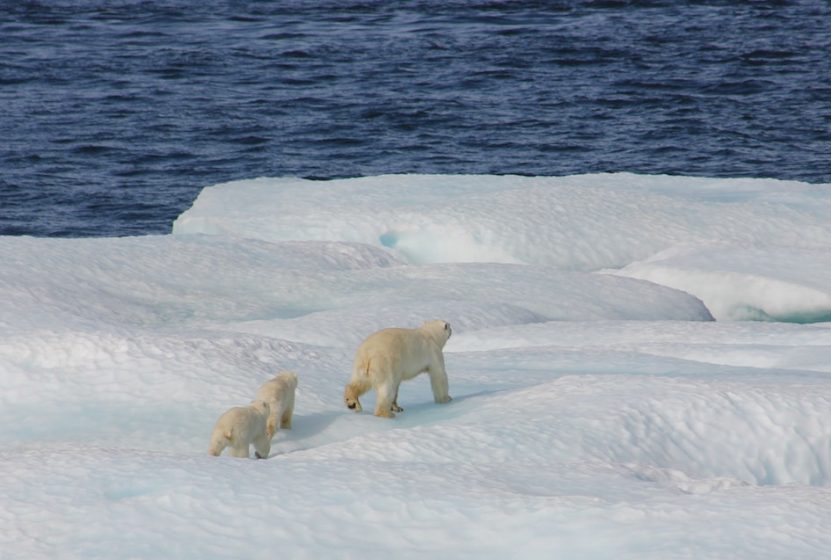 As the days get shorter and the nights grow longer, temperatures in the northern hemisphere begin to plummet. The colder weather triggers various adaptive survival mechanisms to allow animals and insects to survive one of the earth’s harshest seasons.

With freezing and sub-freezing temperatures and snow, food becomes scarce. Animals must not only be able to subsist on fewer calories, but they also have to deal with their body’s increased demand for energy to generate heat.

Obviously, that’s a bit of losing calculus when it comes to long-term survival.

Fortunately, Mother Nature has provided some animals with a few tricks to beat the odds.

Since there is no weather forecast channel for wildlife, many animals have evolved with an internal climate prediction system to detect the changing seasons.

Animals have an internal clock that choreographs their hormone levels and alters various traits like hunger and sleep. These hormone levels change throughout the day and are known as circadian rhythms.

An animal’s genes have a strong influence on these daily rhythms. Recently, researchers discovered that the same genes that control those daily hormonal responses like hunger and sleep may also regulate the seasonal internal clock.

2. Move to a warmer climate.

One response to the impending cold weather and food scarcity is to live somewhere else during the winter.

One extreme traveler is the Arctic tern. This bird, which weighs as much as a deck of cards, migrates every summer and spring from pole to pole. In late July, the tern leaves its nesting grounds near the North Pole and flies to the opposite end of the earth in Antarctica. Each spring, it repeats the trip in reverse. Throughout the bird’s 30-year lifespan, the Arctic tern will have traveled 25,000 miles each year, or about 1.5 million miles during its lifetime.

Birds aren’t the only seasonal globetrotters. Monarch butterflies take advantage of seasonal air currents and thermals to migrate as far as 3,000 miles from Canada and the northern United States to reach their winter homes in Mexico. This journey may even take four of five generations of butterflies to complete.

Land mammals such as elk, caribou, and bats also migrate to more hospitable climates for the winter.

Although not as epic as the Monarch butterfly or Arctic tern, the earthworm migrates to avoid cold winter temps…about six feet below the earth’s surface.

Another animalistic adaptation to winter weather is the seasonal stockpiling of food. Squirrels, mice, rabbits, and beavers will gather extra seeds, nuts, grasses, and twigs for storage. The food is buried in caches, under leaves, or stored in dens and burrows and eaten throughout the winter.

Eastern gray and fox squirrels will hoard their food and scatter it in locations near the nest or den but may often expand their storage area up to seven acres. They may even crack the nut to prevent it from germinating while it’s buried.

Tree squirrels also use a bit of extra sophistication with their nut hoarding tactics. Researchers from the University of California at Berkeley recently discovered that squirrels use “spatial chunking” to bury their nuts by size, type, and maybe even taste.

Insects also hoard food in preparation for winter recess.  Honeybees live off of the honey supply collected during warmer months. And most of the 5,000 species of ladybugs will gorge on aphids throughout the fall. Once the feeding frenzy stops with the arrival of colder temperatures, the insects huddle up in large groups under logs and rocks to wait until spring arrives.

4. Wake me up when winter is over.

While some animals move or store extra calories, others fatten up and shelter in place.

These animals’ internal clock triggers their body’s overeating mechanism in late summer and fall. But instead of using the extra body fat as a fuel reserve, they use the fat as a primary energy source while the animal hibernates.

For example, a woodchuck’s heart rate will slow from 80 to 4 beats per minute. Its internal temperature will drop from 98 degrees Fahrenheit to 38 degrees.

The common poorwill is the only known bird species that goes into a semi-state of hibernation. This nocturnal bird, found in the western U.S and Mexico, will bring its body temperature down to 41 degrees Fahrenheit in the winter. It then hibernates on the ground, where its mottled camouflage makes it nearly invisible. Depending on the weather, the common poorwill will stay in this torpor anywhere from five days to five weeks.

Black bears, on the other hand, will only see their body temperatures drop from about 101 degrees Fahrenheit to 92 during their winter hibernation. To maintain that relatively normal body temperature, the bear increases its fat stores and decreases its caloric consumption.

The black bear stockpiles an extra 50 to 70 pounds of body fat to use as a slow-burning energy source. The bear also reduces its caloric consumption by dropping its heart rate from 80 to 100 beats per minute to 15.

The 13-lined ground squirrel, or golden gopher, spends its winters in North America’s grasslands and prairies in burrows three feet underground. Before holing up for the cold season, the rodent gorges on seeds and doubles its body weight to increase fat energy stores.

Even with all that fat, the ground squirrel would not survive winter if it tried to regulate its average body temperature of 98 degrees Fahrenheit. Once in its burrow, the squirrel’s internal temperature drops to within a few degrees of freezing (32 degrees Fahrenheit). In addition, the heart rate drops from 200-300 beats per minute to 3-10.

5. Changing outerwear to match the season.

Another animal adaptation triggered by shorter days is preserving internal heat by sheltering the body from the cold. Most animals accomplish this by growing thicker and denser fur to provide additional insulation. Some coats also grow lighter to allow the animal to better blend with its surroundings.

How to Prevent Popsicle Toes…

Have you ever wondered how birds keep their exposed feet warm in the winter? Or even how they don’t lose all of their body heat when perched on cold branches or wires?

The trick lies in how the circulatory system is set up in their lower legs and feet. Arteries and veins run side by side in those extremities, so they act like mini heat exchangers. Arteries carrying warm blood from the body loses heat to the colder blood in the veins coming up from the foot. By the time the blood gets to the foot, it is almost as cold as the ambient temperature. And blood traveling back up from the foot is warmed up to near body temperature.

Winter is the most stressful time of the year for wildlife. If animals cannot escape the harsh living conditions that come with colder weather, they must find ways to successfully manage their energy. By manipulating their caloric consumption, metabolic downshifting, and improving physical protective barriers, many will live to see another spring.